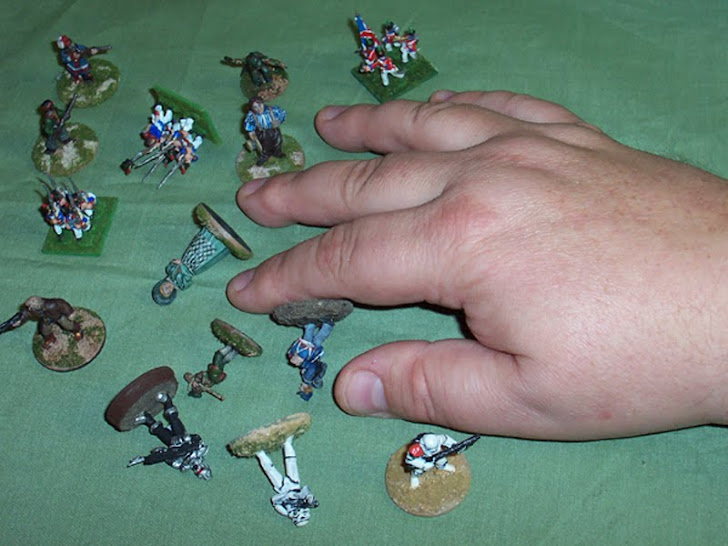 Here are some of the Falkland's paper buildings that I have been working on.
All are made from foam core board and have the color exterior 'skins' glued to the outside. All of them have removable roofs and some have 2nd story floors added. 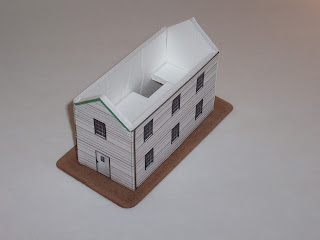 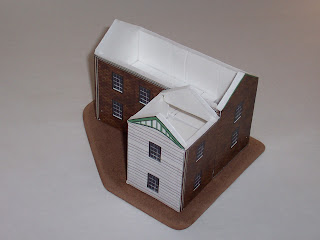 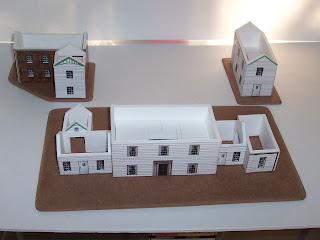 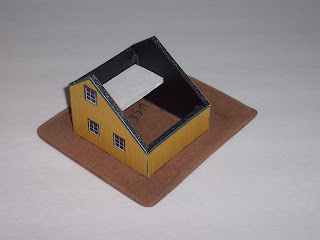 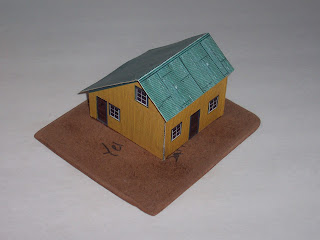 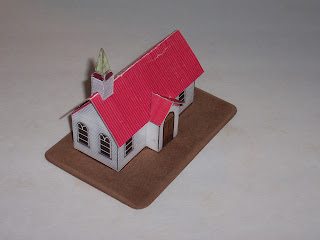 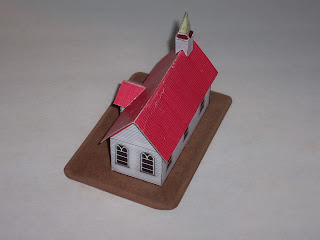 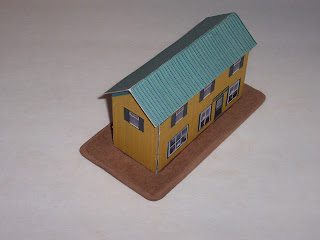 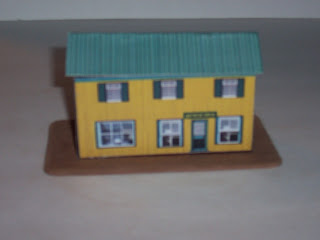 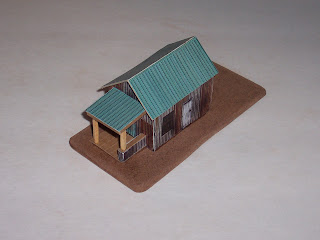 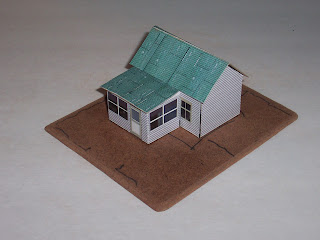 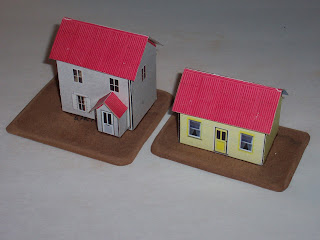 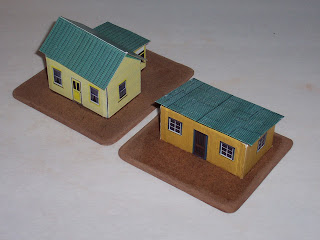 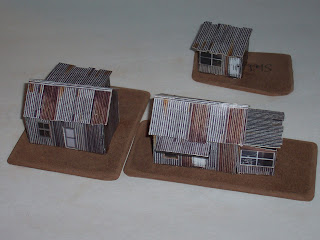 Shanties
(Can be useful in other modern games as well including those set in Iraq, Afghanistan, and others.) 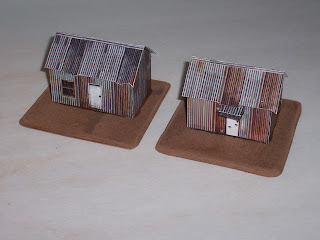 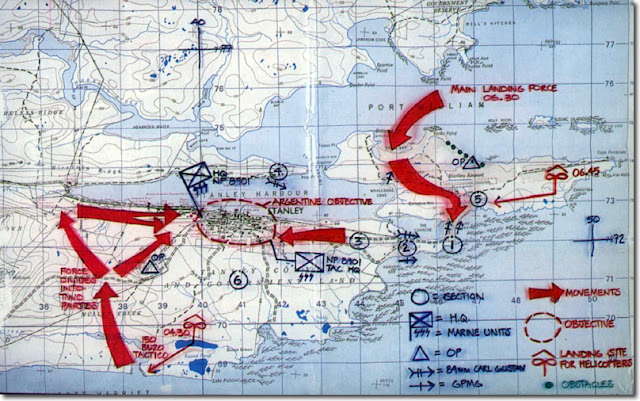 The Argentinian Forces deployed on the Islands the night of April 1-2, 1982.  One of the main goals was to capture the Government complex in Stanley. (See the dashed red circle and flag, map above) 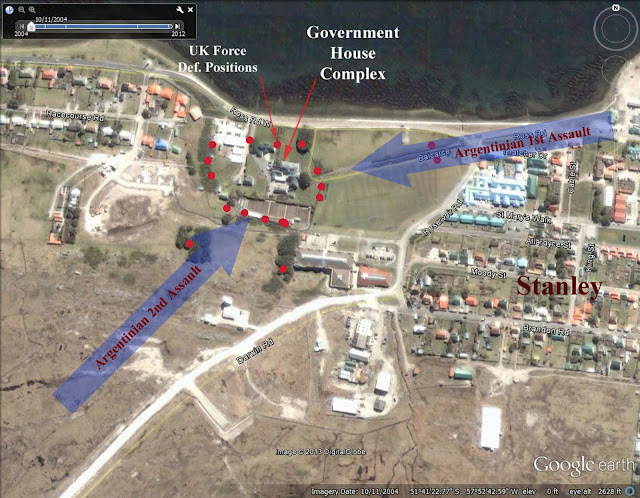 The first Argentinian assault was launched at 6:30am local time. Armored/amphibious infantry traveled through Stanley and up the main road towards to Government House Complex on the hill. (from the right on the map)
The second Argentinian assault, to support the 1st assault, was launched from the southwest, coming up and over a rocky and mostly barren hill to surprise any engaged UK forces from the rear.
(and it worked.) 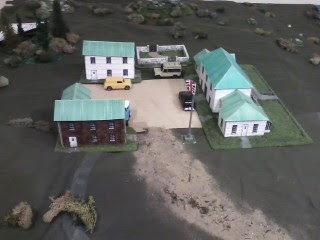 The Government House Complex in the game.  A contingent of over 30 UK Royal Marines were stationed here to protect the governor.  The marines were strategically placed around the complex to defend it against attack.
(Notice the British vehicles in the compound, including the Governors Black car.) 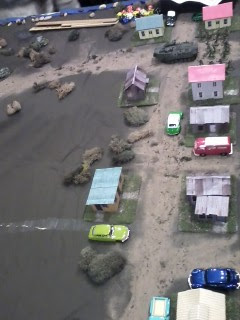 The Argentinian 'Elite' Infantry make their way through the streets of Stanley approaching the Governor's House road. 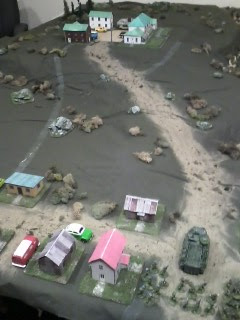 The approach up the hill towards the Government House Complex. 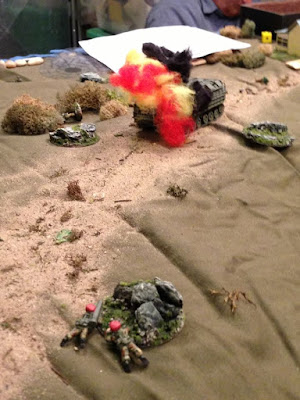 Royal Marines hidden in cover unleash an AT round at the approaching AMTRAK, loaded with a squad of elite Argie Infantry. So much for the first wave. 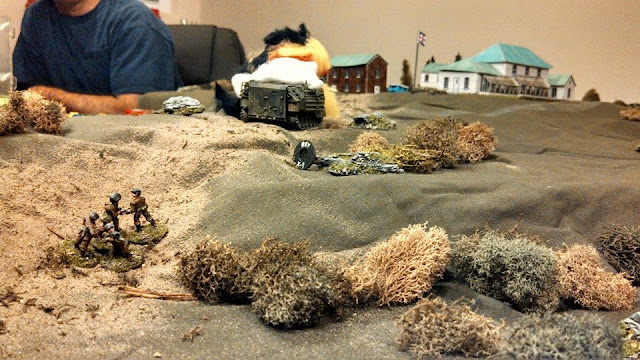 Elite Argie Infantry decide to move back down the hill and regroup after taking heavy fire from the Complex. 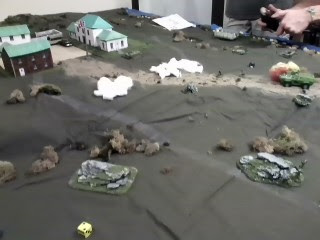 Regrouped, the Argie infantry advances up the hill again, but first shooting some smoke to cover their advance. 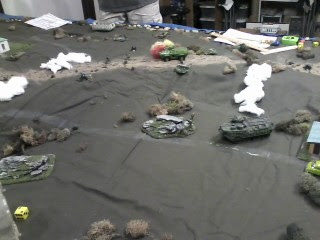 More smoke as additional mobile infantry is brought up the hill.  The UK Marines retreat back towards the Governor's House and take up new positions there. A later attack from behind the Governor's house will split the UK Marines and slowly reduce their fire power until they surrender.
The Royal Marines inflicted much heavier casualties during the game than the actual battle.
...next up will be the Battle of Goose Green and the Skirmish at Malo Top House.
Posted by David at 10:02 PM 4 comments: